December 19, 2015 would have been Phil Ochs’ 75th birthday. Accordingly, plans are being made to celebrate Phil and the legacy he has left us. As more things are known, we will add them to this page. And if you know of anything going on, please let us know at celebratingphilochs@gmail.com or by completing the form at the bottom of the page.

Celebrating Phil Ochs on Goodreads
A list of books that are about Phil or contain substantial pages on him is available via Goodreads.

Celebrating Phil Ochs on YouTube
The YouTube channel includes playlists of covers of Phil’s songs, tributes to him, live recordings, interviews, and Ochs on TV.

December 19-PHIL OCHS FESTIVAL
AT SOUTHMINSTER CHURCH IN THE GLEBE (15 Aylmer Ave, Ottawa, Canada)
A day full of workshops, performances, live art, kids activities, participatory murals… over 20 shows througout the day!
All of these events are in celebration of the life and legacy of political folk singer Phil Ochs who used his songs to advocate for positive social change.
All of the events throughout the day will consist of either performances of Phil Ochs’s material, or material consistent with social justice themes.
Follow @OchsFest for updates about specific workshops and performers. Use the hashtag #OchsFest to get a gold star.
The performers include (so far)…
Tony Turner, Ian Tamblyn Eve Goldberg, Rebecca Campbell Tito Medina, Jesse Stewart, Zachary Stevenson, Erin Saoirse Adair, Moonfruits, Glenn Nuotio, Daemon &Aydri, Brothers Aloud, Scary Bear Soundtrack, Greg Greenway, Velvet Leclair, Larissa Desrosiers, Vela, Robbie Anderman, Elizabeth Riley Band, Stella-Bell Murray, Heather Lynn Song, Arthur II, Adam3, Chris White… and more! There will also be a LIVE BROADCAST of the CKCU radio show Canadian Spaces.
There will be live painting by Arthur II and A. James Brummel

December 19- A Tribute to Phil Ochs
The Gladstone
910 Gladstone Avenue
Ottawa, ON K1R 6Y4 CANADA
w special guest SONNY OCHS!
Featuring:
Zachary Stevenson
Eve Goldberg
Daemon & Ayrdri
Erin Saoirse Adair
TONY TURNER
VELA
Elizabeth Riley Band
… and more!
Also, Erin Adair will be releasing her CD “I’m Going to Say It Now: The Songs of Phil Ochs” at this show.
There will be a BAND with Michel Delage on drums, Don Cummings on organ and Richard Page on sax and clarinet.
Show start time 8:30pm
$20… but the price is negotiable if you lack the funds.
ALL AGES
Tickets will available at folkzone.ca

December 19-Phil-A-Thon: Celebrating the Life and Music of Phil Ochs
Kafe Kerouac
2250 N High St, Columbus, Ohio 43202
We will celebrate the 75th birthday of the the great singer/songwriter and activist Phil Ochs with a evening of his music performed by acts from the Columbus Ohio area. Phil once lived in Columbus, attending the Ohio State University and began his topical musical journey here. Please join us for this special night honoring this brilliant, unsung performer.

December 19-Phil Ochs’ 75th Birthday Celebration in Berkeley, CA 12-19-15
The Social Justice Committee of the Berkeley Fellowship of Unitarian Universalists has reserved Historic Fellowship Hall for Dec 19, 2015. We’re sending out a call for people to do one or two songs, or 10 minutes. The performers and songs will be listed in a simple program like we did for the Berkeley Protest Fest with Country Joe McDonald on Aug 15, 2015.

December 19- PHIL OCHS’ 75TH BIRTHDAY CELEBRATION
102 East Brady St.
Tulsa, OK 74103
918-574-2710
On December 19 at 2 PM, join us at the WGC to celebrate Phil Ochs’ 75th birthday! A screening of the documentary about Phil’s life and work will be shown in the theater. Phil Ochs: There But for Fortunefeatures archival footage of Ochs, interviews with his younger brother, Michael, a producer of the film and the singer’s manager; his older sister, Sonny; his wife, Alice Skinner; and his daughter, Meegan Lee Ochs. It also includes interviews with others such as:  Joan Baez, Abbie Hoffman and Jerry Rubin, Van Dyke Parks, Pete Seeger, Dave Van Ronk, Peter Yarrow, Sean Penn, and Christopher Hitchens.
After the film, Michael Ochs will have a Q&A session about the film and Phil’s life. Don’t miss this very special presentation! 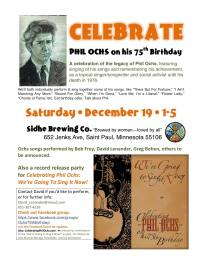 December 20-Phil Ochs’ 75th Birthday Sing in Gloucester, MA
Lanesville Community Center
8 Vulcan St, Gloucester, Massachusetts 01930
Phil Ochs was a prolific songwriter and folksinger of the 1960’s, writing topical songs including “There But For Fortune”, “Draft Dodger Rag”, “I Ain’t Marching Anymore” and ‘Too Many Martyrs”, and performing in civil rights rallies, anti-war demonstrations and organized labor events. He tragically suffered from bipolar disorder and took his own life at the age of 35, but his music continues to inspire us 40 years later. Please join musicians of the North Shore area in celebrating his 75th birthday by singing his songs. 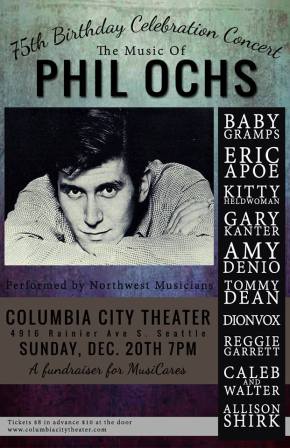 There is currently work being done on a tribute CD by his fans.

November 15- Phil Ochs Tribute Show
Sunday, November 15, Bob Lusk and Michael Stock will be celebrating Phil’s 75th birthday on Folk & Acoustic Music with Michael Stock. The show will start at 2 PM (Eastern Standard Time) and can be listened to online at www.wlrn.org.

November 24- Folk Film Festival: Phil Ochs: There But for Fortune
Jewish Museum of Maryland
15 Lloyd St, Baltimore, Maryland 21202
A “rockumentary” with 1960s folk singer Phil Ochs as he “comments on the ills of the society — both of the right and of the left.”

December-December  is  Phil  Ochs  Month  at  Songs  of  Freedom
New York
Look at link to find viewing times and episodes for your borough.

December 13-19 Phil Ochs Dedication Week
Elvis Guevara -Mixing Pop and Politics, an online group that promotes political songs, has agree to make the week of Phil’s birthday a week solely dedicated to him. They will be posting songs from him, tributes to him, and other news as appropriate.

December 17-Phil Ochs Evening in NYC
Odradeks Coffee House
82-60 Austin St, Kew Gardens 11415
It is right next to the Long Island Rail Road Kew Gardens station. By subway it is an E or an F train to Union Tpke and then a short walk.
The evening will go on between 7:30 and 10pm. The format is to be decided. (stay tuned)
One reason that this venue is intriguing is that Phil actually played here in the early 1960s when it was called The Interlude Cafe, and Kitty Genovese was murdered next door, which was the inspiration to Phil’s song, Small Circle of Friends.
If you are interested in getting involved with the evening I would prefer that you contact me directly via email at
joellandy@yahoo.com